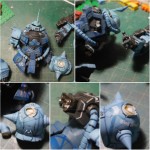 5 years ago, I built a Gouf Custom conversion kit using the Gouf 2.0 frame and the resin conversion kit from Neograde. Looking back, it was a fairly quick build that took only about a month, but then again, I think I spent quite a few hours in that month working on the damn thing: Progress Page. I added in an LED in the head that was completely self contained within the head and wrote a quick tutorial for that as well. And the pictures below were taken from the completed page.

For the past several years, this kit has been on display at one of our local gunpla shops. Some of our fellow model builders have sold their kits to collectors via this shop, so I put a little price tag on the kit as well. There have been some incidents that have resulted in some damages to kits in the display case because of a fairly large earthquake and some sun damage to paint. But so far, the kits I’ve placed in the case have been fairly lucky. At least until recently, and the luck has run out.

I got a message from the shop owner that he wanted to chat with me about something and from the tone of the message, I already figured one of my kits had a little accident. So I dropped by the shop today and the owner handed me a box with the Gouf Custom inside, in a few pieces. The shop owner wasn’t in the store when the accident happened, but according to employees, there was a child bumping into the display case, and my kit fell to the floor from the top most shelf. And again, according to the staff, the parent of said child then grabbed the child, and ran out of the shop and sped off in an older red Kia. Great parenting skills. Too bad I wasn’t actually there to witness this, I would definitely have fucked that asshole up some, as soon as they tried to run and were outside the confines of the store; I’m sure some cops would have been called. BUT, all this is hearsay and since I was not there, I will probably never know the truth to what actually happened to the kit.

From the damages, the left shoulder spike is broken, as well as the left latch detail on the upper chest. The right shoulder was glued in position since the joints alone could not hold the weight of the resin in the pose I wanted; so that bit of plastic, glue and all snapped. I used an epoxy glue, so there was a pretty decent amount of force involved to be able to break that. The backpack thruster is also bent. Again, do not know what happened, but it seems odd that the kit could fall to the ground inside the display case. I’m guessing that the door to the case was open and it free fell to the ground, or it was being handled. The damages don’t really make sense to me.

I’m not going to question the shop as I’m pretty supportive of them; and I’d much rather not call into question their integrity. They’ve been pretty close friends with the group since they opened; and in previous cases of damages to modeler’s kits on display, they were VERY good with compensating the modeler. Back when the earthquake happened and the sun damange to the other kit’s paint; I actually considered pulling my kit; and the staff there was actually expecting me to do as much when I showed up. But I felt that the advertisement for our group, our show, and the promotion of the shop far out weighed the possibility of a broken kit. Hell, I still feel this way even with a broken kit. And when I left today, I still had all the kits (with the exception of the Gouf) that I had previously placed in their display case, still in their display case. Does it suck? Hell yeah. I put a goddamn ton of work into the kit, and to have it damaged like this really fucking sucks.

Can it be repaired? Of course. Anything can be repaired. But, for something like this, I would have to completely strip the kit, decals, paint, etc; and rebuild it as a brand new kit. I build the thing 5 years ago. The paints I used were custom mixed. Even the base colors I used are from a brand of paint that is very difficult to get; so the possibility of doing touch up work as a quick band-aid is not the route I would take. I have rebuilt kits in the past; so there’s always a chance I can use this as part of a diorama in the future where the Gouf Custom is on the bad end of the stick…I mean, it’s due. So for now, the kit is shelved in a box, and who knows, maybe it’ll see some rebirth in a future project.

The shop owner was pretty down about this happening. I mean, I understand that he feels responsible; and in a way, there is some responsibility; as it is their store, their display case, etc. But I chose to put up my work in his shop. I put more responsibility on the child and parent; or whomever actually caused the accident. It’s just a shitty way to teach your child the value of someone’s hard work. Oh, you fucked up, well, let’s run off and pretend that nothing happened. Seriously? Own up to your fuck ups. I generally get pretty fucking pissed off when folks that fuck up, don’t own up to their stupidity. Own it, apologize, do what you can do to resolve the issue, and everyone moves on eventually.

The shop owner tried several ways to compensate me on the spot today; for which I genuinely appreciated. But I felt it wasn’t completely his responsibility – as I don’t know the full truth of what happened. So my conscience isn’t clear if I accepted anything from them. I like our relationship, I think it’s still solid. A good number of people reading this already know what shop I’m talking about; but I purposely do not mention it because that fact really doesn’t matter here. Now if I knew the person who was directly responsible for this incident and they fucking ran off? Yeah, safeties off, call the lynch mob, they’re gonna be fucked. I’m not even sure that I was offered compensation for the Sazabi Incident; but I know I would had declined any sort of compensation there too; and I was in such a blind rage, I don’t remember exactly what was said to me those couple of days.

The moral of this little tale is that shit happens, we get pissed off and angry that it actually happens. But since time travel hasn’t been invented yet, there’s not much there is to do; but to accept it and move on with life. It’s not the end of the world; it may feel like it; but given enough time; the wound will eventually heal. And honestly, this one doesn’t sting as much as the Sazabi.

2 Responses to “Another kit bites the dust…”