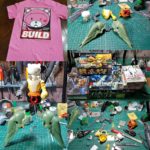 END_OF_DOCUMENT_TOKEN_TO_BE_REPLACED

After seeing so many versions of this kit late last month, I wanted to do my own. The panda thing has been done several times over, but still, I wanted do do my own. Taking a break from the HiNu, this little kit was a very quick and dirty build, just to get the bear out of my system. There is a ton of modification potential with this kit but I only did a few mods:

END_OF_DOCUMENT_TOKEN_TO_BE_REPLACED

A little update from the work done over the past few days. With the parts all sanded and ready for paint, I sprayed on some primer over everything to check for sanding mistakes and check the putty mistakes. After fixing those mistakes, a fresh coat of primer and on to painting.

The small amount of carbon black I have painted on the head should be clues enough as to the paint scheme I’ll be going with for this kit. I know that there are a ton of Pandabearguys already done by various modelers, but hell, this is my take of that idea.