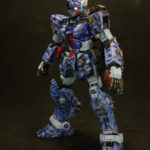 I got to thinking about the kit and the mods I made for the thing and never really got around to listing them out. It is not only for the competitions that I plan on attending; but a visual reference to how much really changed on the kit from the stock photos Bandai and others have put out to the dizzying camoed painted completed version I have now. I also realized that when I snapped “final” pictures the other day, I left some sticky tack on the lower area of the GM’s slide down visor. So I took some new pictures with some slightly altered lighting to fix the rather harsh looking light against the kit. And the new pictures I took today: