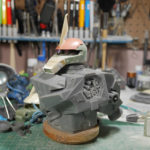 The old adage that if you don’t use it, you’ll lose it; is very true. I did some 3D designs for the Dom Barrage project but once those pieces were designed and printed and I spent more time with the hands-on side of things to finish the build; the 3D design skills flew out the door. Since the Dom project was fairly intense, I wanted to relax a bit and work on something simple like the Zaku Exceed head. I finished the Gundam Exceed head while in the middle of working on the Dom project as a quick break. But as I started looking at the Zaku heads and thinking more, I realized that I should keep practice on the 3D design. I needed to relearn a few things but it is kind alike riding a bike, once you get used to the balance and everything, it just becomes muscle memory. So my quick and simple project kinda blew up into a full blown custom project….converting the Zaku Exceed head into a Gouf Custom head with a full bust.

I’m getting much more comfortable with the design, but I’m still VERY novice at it so the end result isn’t the greatest in terms of properly designed 3D files. This first set of pictures are the initial build progression via Blender. The basic idea is to block out the design using reference pictures I took from the NeoGrade Gouf Custom Conversion kit I built years ago. Once the blocks are laid out, details and shaping can be done.

Read more about the project after the jump!

The design process didn’t take too long this time around since I learned so much from the Dom project. I just needed to relearn a few of the shortcuts and techniques are easily forgotten with disuse. I learned a bunch more while working on the design this time around too. The whole design process took about 4 or 5 days. Not too shabby. Since there is nothing physical, it is difficult to stop and take progress pictures but I did take a few in progress screenshots via Blender.

I was originally going to just do the chest piece; but sometime last week, I started working on the backpack and I think this helps balance things out. I also designed this in pieces for easier print and to leave the project open for making an exceed model conversion kit. Folks have been asking for the STL files, but honestly, the design isn’t solid enough. There are TONS of issues because I’m still learning correct order of operation and good 3D design methodology. I want to take another couple of classes on 3D design so that I get faster and better at the process. The Form 2’s slicer is VERY forgiving and my poor designs are actually printable because the slicer does a pretty good job at guessing the mess that I was trying to build and then print it.

Once I started getting close to finishing the design, I printed out a quick test piece. This piece will determine the actual scaling for the rest of the bust design. The collar piece will connect the rest of the bust to the Zaku Exceed Head model. I measured the diameter for the bottom of the head and did the math to figure out the correct scaling from the Blender files to the Form 2. From my design, I need to scale this at 14.14 times. And the collar is a small enough piece that if I printed it at 100 microns (.1mm resolution) it shouldn’t take too long to print.

The collar printed in a few hours and after clean up and some extra UV curing, the test fit is perfect. I now know the scale factor for the rest of the design and kick off the main chest piece design in the printer. The chest piece is separated into 5 pieces, the two cockpit window inserts, the side chest details and the center chest block. I printed the center chest piece at 50 microns (.05 mm). The print time estimation was 25 hours.

I picked up the red Zaku head on my trip to Japan several years ago and picked up several green Zaku heads recently at AX. Since I only had the 1 red with the commander fin; the first step is to make a copy; so a lego box was made with playdough lining the bottom and the part is covered with liquid silicone to make some molds. The same is done with the commander fin.

The chest block actually took 27 hours to print. The block of resin was transferred to a isopropanol alcohol bath and left to soak for about 15-20 minutes. Once done soaking, it was rinsed off and dried and UV cured in some sunlight. The supports are clipped and pulled away leaving a giant block of 3D printed resin.

This block of resin needs some clean up, and again, since my skills with 3D design isn’t quite there yet, there is A LOT of post processing that needs to happen to get this to the priming phase. But in just 27 hours, the chest block is printed and looks pretty good IMO.

Now some test fitting with the collar and Zaku head. There are a few problems discovered here. 1. the collar doesn’t sit into the chest block. Poor design and lack of forethought. The bottom of the collar piece is angled incorrectly and too large to fit the angled slot of the chest contact area. This is purely a mistake in design. Having the collar as a test piece was perfect to catch any gotchas that I can then translate to the rest of the kit that hasn’t been printed. I just went back into blender and modified the collar to correct the fit issue. 2. The collar was too short, the Zaku’s nose doesn’t clear the front of the chest. So regardless, the collar piece needs to be adjusted and reprinted. This bust piece is going to be large. The comparison to the MG sized torso piece should be a pretty good indicator.

The molds for the commander Zaku are done so a few casts are made. Time to get to more cosmetic mods to the Zaku. It is NOT a Zaku boy; so we need to bring out the cutting tools. Hobby saws are brought out and just like dropping the top like one would do a top chop for a hotrod. I just ran carefully along the top indented edge of the head and cut the head side pieces in halves.

Tamiya tape is used to draw in the amount of plastic to remove and the lower halves of the head are sanded down to remove plastic material. Measuring is important since the two halves are being sanded down independently. I don’t want to over sand. Once the two sides are measured and sanded down correctly, the tops are glued back into place. And a quick comparison with the original Zaku look should be fairly visible. The window pillar was also removed.

Time to get starting on the nose job for the Gouf. I measured the MG Gouf Custom’s nose and scaled it up to start gluing plastic and cutting excess plastic. The Gouf’s nose is flatter and shorter in height and longer in length compared to the Zaku. Some styrene is glued to the front of the snout to help extend that while keeping the vents. The top of the snout is trimmed off and the front piece is extended from the main nose piece. Bondo is used as the quick filler here.

At this point, the new collar has been printed and it fits perfectly on both sides and the clearance between the Gouf head and the body is good. The first side piece of the chest is printed along with the backpack cable connection details finish printing after 29 hours. The parts are combined with the new collar and the side piece for the picture below. I designed some internal actuators and gears for the side chest details where the arms would effectively attach.

When the new collar was printed, I also printed out the thrusters and backpack cable attachment point. Since I will not have the waist cables, I still need the attachment point on the backpack. I did some guess work for the internal attachment point design. I think it looks pretty good and I got more practice with detail work in Blender.

Some light curing putty finishes the build up progress for the commander fin. Here’s a comparison with the original Zaku head.

The backpack took 29 hours as well to complete printing. The thruster bells and cable attachment detail are attached with sticky tack and the bust is 1 piece shy of completion. As of this posting, there is still another 3-4 hours left in the estimated 20 hour print. I added the legs back to the NeoGrade Gouf Custom for a more complete comparison between the 1/100 and the bust. If you look carefully at the back area of the gouf’s visor you should see that I’ve glued in some styrene. The Gouf’s visor differs from the Zaku in that this area is angled and not a rectangle shape. The styrene is glued in as support.

Since I have a copy of the commander head piece, i can get to modifying the original part. Light curing putty is used to build up and shape the sort-of-widow’s peak on the front of the Gouf’s visor. Light curing putty is also applied to the back of the visor areas using the glued in styrene strips as structural support. Sanded down, the head is starting to look more and more Goufy.

Here are some more comparison shots with almost all the pieces of the bust printed. So much for a quick and dirty little Zaku Exceed Head project. This may even turn out to be a conversion kit. This will depend on how much it’ll cost to mold and cast all these. I’ve never molded/casted anything of this size so more unknown territory for me.

This last bit here has nothing to do with the project and everything to do with shameless plugging for SCGMC and our shirts! We reprinted the Kampfer and Alex shirts and with the Alex shirt, we printed those with color discharge inks so the feel of the shirt is completely different from our previous Alex shirts. We also reprinted the Gunpla Elitist shirt which we did a very limited run when we first printed them. In addition to the small run we did now, we also printed the design on black shirts. The design over a black shirt really pops!

Click the store link above or click this link to check out the rest of our shirts we have for sale! Again, limited quantities so get your shirts today!