Model Building » Gundam Models » Gusion Completed, but there’s a lesson to be learned here…not that I’ll actually take it to heart. 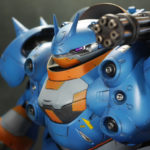 I learned nothing from my mistake with the 1/144 Gusion, and colossally fucked it all up again with the 1/100. Just look at the shoulders for the 1/100 as well as the 1/144. It’s not the same issue per say, but it’s the same underlying issue that resulted in the problem. But we’ll get to that later.

First, there’s the final bits of detail paint work and the ever-so-fun patience game once all the paint has been sprayed. The first gloss coat needs time to cure. Decal application needs time for the decal softening and setting solutions to work. The second layer of gloss coat needs to cure. The enamel wash needs to be applied – then a bit of time to allow it to partially dry, then the cleanup then letting it sit to fully dry. And the final flat coat and letting that cure. But once the flat coat is done, we’re not quite done yet either. Since there are some detail parts that need attention as well as the final assembly. It’s damn hard fighting the temptation to only wait an hour after the final flat to dry to the touch and just get in and start assembling and gluing final detail bits. The flat coat is like any layer of paint, it needs time to cure. The one hour, dry to the touch ain’t gonna cut it. My impatience has caused horrific accidents at this stage from fingerprints to marred paint. Patience sucks ass; but is a necessary evil.

The last bit of work was on the gatling gun. I painted the thing gloss black and then sprayed the barrels with alclad polished aluminum for that chrome like finish. How does this differ from the chrome? No idea, I’m a wee bit color blind, so just by itself, I don’t see the tonal differences; maybe I need to spray something with alclad chrome and the polished aluminum. But I digress. The painted pipes were left for a full day to cure up. I don’t want to lay down some tape only to have the tape peel up any uncured paint. But once cured, tamiya masking tape is laid down and the larger areas of the pipes were masked with parafilm. The less sticky tape I need to use, the less chance for screwing up the paint. Once the masking is down, the whole gun is painted with Alclad Burnt Iron. I love the look of this paint right out of the bottle. It has a flat finish that I really like and still somehow looks fairly metallic.

Once the paint cures for a day, I peeled up the masking and finding no errors, I moved on to a quick test assembly. I still needed an ammo belt and was having trouble finding something to use short of just scratch building one; then I remembered that my Gouf Custom displayed at a local gunpla shop was destroyed sometime last year; so I had the perfect part, the metal link ammo belt that came with that Neo Grade conversion kit. The belt was ultra glossy which caused an issue when I entered the Gouf at another competition years ago after I had first completed it; so I flat coated the belt. Connecting everything together, I think it looks pretty cool.

The gun is set aside to slowly cure; I focus back on the main armor pieces. Time for a gloss coat. I really liked the finish of the custom mixed Mr White base and the Subie World Rally Blue pearl. It was a semi gloss and there were some bits of pearl still visible. BUT, I needed to protect this paint layer from the onslaught of other fun chemicals I have planned. The first layer of gloss covers all the exterior parts. Even the parts that I did not have plans of applying decals. Why bother? Well, the gloss coat makes the finish tone darker. So to keep from having uneven tones, all the parts were gloss coated. I have a comparison shot of one of the legs in it’s new gloss coated glory next to the really cool raw finish I was about to ruin with the gloss.

After letting the gloss sit for a day, I laid down some decals I found from my decals’ box. I got some promotional water slide decals with Chinese writing a few years ago from one of the GBWC events and I’m finally using them. I picked “破壞” which literally translated means “to ruin” Oh the irony. It can also be a noun for “destroyer”. Which fit the suit when I was picking out the phrase to use. I used this as well as some warning decals, and then some Gamera decals. I didn’t have a waterslide decal set for the Gusion, the kit is really too new, and there really isn’t much in terms of decals for the kit anyways. Creative licensing at its best. I also added the 40 as an hommage to the old Ford GT40 in Gulf Oil Livery. I didn’t plan this, but after painting the damn thing and removing the masking, that’s the first thing that popped into my head; I subconsciously painted the Gusion in Gulf Oil Livery.

Happy with my decal placement, because it hasn’t even clicked yet. I let the decal softer solution sit for a full day then spray gloss over the decal areas. I don’t need to gloss the whole parts since I’m only protecting the decals as well as spraying enough gloss to cover some of the thicker decal edges. That dried for another day. Panel lines are applied using an enamel wash and lighter fluid soaked paper towels for cleanup. Another day passes while the enamels dry enough to be cleaned up. Only when it’s cured can I spray a flat coat.

I think trapping uncured enamel thinner/lighter fluid leads to that stuff breaking down the plastic and turning it brittle. I know that excessive use of lighter fluid in my weathered projects have severely weakened the plastic of those kits. I could look at those kits wrong and they’d crumble on me. So time was allotted for the panel line wash to dry and cure.

Friday of this past week rolls around and after work, I finally get to spray the final flat coat to finish everything. And I need to let this cure. This is the absolute most difficult level in the patience game. The kit is SO GODDAMN CLOSE to completion. Just removing some masking bits, gluing some detail bits, and assembling the whole thing right? Gotta wait. Gotta wait. I’m excited.

I failed at the game, AGAIN! About 8 hours go by and I cannot help myself, I sit down and start removing masking tape, assembling the inner frame to the outer frame pieces. Start gluing some detail pieces into place. Start putting the thing together; and it’s starting to take shape. I got the arms together. I got the legs together. Getting the waist and attaching the legs. Getting the upper body together… Uh oh, fuck me…. At this point, let us revisit the 1/144 Gusion that I built earlier this year; look at the shoulders, notice anything strange?

Ok, here’s a picture of the Gusion from IBO anime; look at the goddamn shoulders. Yep, I assembled them upside down. And the fix is too much a pain in the ass since it’s already glued together and painted. So lessoned learned right? While I was working on this Gusion, I marked the shoulders right and left. But this time, I’m gonna outsmart the kit, I chopped off those damn square pegs in the shoulders and replaced them with my own spikes and such. Oh but I still failed to mark them up and down. And so I learned nothing from the 1/144 a mere few months ago. My Gamera decal as well as the 破壞 decal are; as I discovered while doing the final assembly; fucking upside down. Awesome. I have plenty more Gamera decals, but no more of the 破壞 decal; so I guess I could carefully sand away those decals and apply something new there. But I’m entirely too lazy. So the irony of “ruining” this; the decal application was a true 破壞(ruin) of the kit. So I guess it now a true double entendre; completely unintentional. At least all the other decals are right side up… This also lead me to swap out my originally planned right and left shoulder placements. The spikes are now on the right and the shoulder with the tanks on the left

Saturday morning, I glued on the final bits of details for the forearms as well as the shoulder tanks.

Once everything got put together; I set up the photo booth and snapped some pictures of the completed kit. I have a magnet at the back of the base of the neck frame piece. When the head is pushed down into position, the reed switch is activated by the magnetic field and the LED circuit is complete, lighting the pink eyes for the kit up. I think this looks much better than the original yellow eyes for the kit. Granted I could have just painted it, but there’s just a ton of room in this kit; so it just begged for an LED. I didn’t feel the need to go overboard and add LEDs to the rest of the kit; so only the eyes this time.

SHAMELESS PLUG!!!
Back by popular demand, we got our Wing Build Shirt printed and up for sale. Click here to order yours!

One Response to “Gusion Completed, but there’s a lesson to be learned here…not that I’ll actually take it to heart.”