Model Building » SCGMC 2014, come and gone, here’s what you missed! 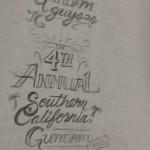 It’s mid November, we’re getting our first rains and the weather is turning colder. The convention season is pretty much over with PMX being one of the last major anime/comic/asian media conventions; what better time to come to the Southern California Gundam Model Competition? If you missed it, well, you have a year to plan for the next one. We knew we pretty much outgrew our event space last year, this year really proved that point. We had about 170 attendees, a 52% increase from last year. For model entrants, we went from 42 to 70 entrants, 67% increase. The number of model entries jumped from 76 to 114 entries, 50% increase. Thanks for all the support you guys have given us in attending our event! There is a vast improvement on skills. The beginner’s table exploded, and a good number of those entrants need to move up to the advance/intermediate level. A good number of the advanced level builders need to start competing with the experts. It’s nice to win the SCGMC challenge coin, but to have your name and kit immortalized on the SCGMC Experts plaque; I’m still trying to get my name on that board! Competition is the best motivation for improvement!

Next year, we’re definitely moving to a bigger venue; then we can then explore the ideas for more vendors such as someone to sell LEDs and electronics, and folks that have too much stuff and want to set up a table swap meet style to thin out their collections. The parking at our venue is horrible, so this is definitely an issue we’re taking to heart. But if you have any issues with our event, please do not hesitate to bring them up to one of us; we’re always looking to improve the experience, and the voice of the attendees is very powerful!

From our standpoint, we felt that we’ve made some great improvements on our event. We streamlined our judging process which keeps us on schedule. We heard the moans about the small raffle cage that trapped tickets, and picked up a large acrylic barrel. We do listen! And we understand that there are always a few tweaks and things to make things better, but it’s only our 4th year. I think we’re doing pretty damn good. And we had an amazing turnout for our Unicorn Grunt theme this year.

Next year our theme will be the “1/144 City Diorama” The idea here is that everyone can push their building levels even further, and try their hand at the diorama. We had some amazing dioramas show up this year and we’d like to push that. Since next year will be our 5th year anniversary, we want to make it special. Our first year, ThoseGundamGuys as a collective built a six piece 1/144 diorama:

Next year, we want to include everyone for our 5th year display and tie it in with the competition! The diorama can be as simple as a few 1/144s on a tarmac or roadway; or as complex as a military base or city with buildings, bridges, etc. We’ll just put these things together Lego Movie style, and hopefully have a huge cityscape piece to show the world!

Ok, enough rambling, we’ll get more details about next year as soon as possible, but for now, get those ideas for your 1/144 City Diorama flowing.

The full gallery, which includes pictures taken by the TGG staff as well as Jonathan A. who attended the event: http://gamerabaenre.com/?page_id=3313

Details on the 2014 SCGMC winners after the jump!

The Winners(I’m pretty sure I got all the correct pictures with the correct winners, if not, my sincerest apologies):