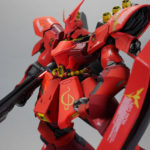 We are 6 days and counting until SCGMC 2016! And I just finished this little bugger! Not the best work, but it was fun to get a fairly quick build done. Last time I updated was right before a business trip to Toronto; so I’ve just been focused on getting the damn thing done. This would have been done a little bit sooner, but we recently added another corgi to the army. But his cuteness and all that happy jazz will slip in here and there so that the girls reading this over their guy’s monitors can all scream kawaii!!!! So there will be little corg interruption throughout the rest of this post.

There was quite a bit of work on the Saz since the last update. I’ve been doing more pictorial updates from the potato camera posted up on our TGG FB page so the little corgi addition is really at fault for the lack of a proper intermediate update. But here it is finally, and it’s also done! SCGMC, here we come!

Now this handsome fellow is Bob the Corgi. The site is basically a skeleton for the little bugger as we watch him grow and annoy the shit out of Hugo and Ken. He was born September 1st and we picked him up on Oct 27; which coincidentally is Hugo’s birthday. I don’t think he was overly happy with his 13th year birthday present.

END_OF_DOCUMENT_TOKEN_TO_BE_REPLACED 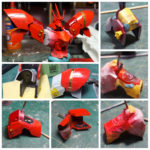 I picked up this kit about 5 years ago to date on a trip to Hong Kong with my wife and friends. I believe I actually picked this guy up from the SMS shop in Mong Kok; the place has since moved a few times and changed names; but I think it’s still around. The folks in HK in the resin gunpla scene can point you to the right direction. The kit is basically a recast of the Vicious Project 1/144 Sazabi. It’s a full resin kit, and I figured I need to catch up to the number of Kampfers I’ve built. Counting rebuilds and this one, I’ve done 3 1/144 (first one back in 1989 I think) and 4 1/100. Ok, maybe I’ve already surpassed the number of Kampfer builds. I’ve pulled the parts from the box a few times over the years but ended up shelving it. I once got as far as clipping flash and small bits of sanding; but it’s gone back onto the shelves for other projects. I finally sat down and started cranking out work on it the weekend before last.

END_OF_DOCUMENT_TOKEN_TO_BE_REPLACED

It has been a while since my last update. Being social is starting to interfere with the Saz progression. I’ve also slacked off a bit on the pictures as well since the current progression was highlighted in the previous post and I’ve just been applying the same techniques as I did for the upper torso and head to the arms, lower torso, and skirts.

Last week, my friend Brian came out from his snow covered land of Mary toting his dive gear and fairly new dry suit that he picked up on his visit when I got married – almost 1 and a half years ago. Granted he did test his dry suit out locally in a pool, but hasn’t truly tested it with a real dive.

This past weekend was the annual Valley Con presented by the Pasadena Modeler’s Society. I like this show as they’re always changing things and not strict to the ideals and practices of the typical IPMS show; it is a nice little change of pace. Angel, Mike, and I planned on going representing TGG with some flyers. One of the venders at the event stood out to me as they sold LED packets for model lighting. Yes, this runs right up my alley. I figured they’d be a really good addition to SCGMC in November. We do have room for an additional vendor, and this won’t tread on the current vendor’s competition.

Details on diving as well as some videos and a little more discussions on Valley Con after the jump.

END_OF_DOCUMENT_TOKEN_TO_BE_REPLACED

Since this is the actual body paint posting, I’m including a few pictures from the previous post so there is some better continuity. Weeks ago, I grabbed some plastic spoons to do paint tests. I used different base metallic paints and different clear reds from various brands before settling in on the three colors I have below. The process arduous, and I went through 10 different combinations before settling down. Below are the three colors to match up with the color scheme on the instructions. The lighter tone uses a mixture of clear pink, a small amount of clear orange, and clear red for tonal changes, sprayed over alclad super bright silver. The red is just Finisher’s clear red over alclad super bright silver. The deep red areas are finisher’s clear red over alclad polished brass.