Model Building » Almost finished with the Zeeks and stripped a Shiki 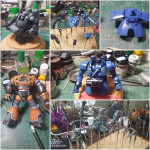 Another productive week/weekend for the diorama project. Last I left off, I had just finished base coating the Zeonic suits. A few days were spent masking off the two kits and getting the main colors painted. I have a bunch of different thickness masking tape reels from a company called Aziu. This makes for an easier job for masking off a simple design. Running off a fractal style scheme, this works to add some style to the basic color scheme, since I was trying to get close to the stock colors for each respective kit. Hours of masking and only minutes of painting. Then waiting for the paint to dry a little before removing the masking tape.

There is a little debate on when to remove the masking tape. If there are layers upon layers, then the unmasking happens when all the painting is done. Some believe that while the paint is not completely bonded, it will be better to remove the masking tape as it reduces paint chipping. Others think that this shouldn’t matter and the paint is a thin enough layer that there’s not affect. I’ve done both, I’ve gotten chipping on both. So there you have it. What ever the hell works for you, stick with it. I believe I waited a day, not because I wanted the paint to dry, but once I got done masking, it was pretty late so I only have time to spray on the paint then call it for that night’s progress.

The masking tape is removed and we can see the Zulu and Zogok have a pattern emblazoned. This is complete personal preference, and I just think it looks cool. I’ve done this on a few project in the past… the lesson here is working with a familiar skill.

This was all done earlier this week. Some of the masking for the Zogok can be seen during our bi-weekly TGG & Friend live building broadcast:

The following day, I had a one day business trip up to Palo Alto. Finished with work, I stopped by the good folks at Tatsu Hobby and picked up the new Hyaku Shiki 2.0. And the nice folks there lent me some new nippers and I started clipping the kit and got most of the torso frame together before they closed and I had to catch my flight home. Damn flight was delayed, so I should have hung out a little longer.

Once I got home, it was too late to work on the diorama, so I cut open the rest of the Shiki’s parts bag and grabbed the gold plated runners. Clipping two runners to make them fit into a smaller box with Zep Purple Industrial Cleaner; the parts are thrown and left overnight. In the morning, to my surprise, just about all the plating is gone and I’m left with clean translucent white runners.

Posting this up on several social media outlets, I’ve been asked why the hell would I ruin such nice plating? Well, I’ve done it before; at least 13 years ago with the first Hyaku Shiki MG kit. For which I recolored and painted in a “Char’s” color scheme. This kit is still in my display case at the bottom still collecting dust.

Which brings us to the present, with this newer kit. I’m stipping it because I will be painting it my own tone of gold. There are still nubs that need sanding, granted there’s a great deal undergated, but there are some seams here and there; so the purple industrial cleaner really did the trick. Looking back at my old progress, the 409 I used worked, but didn’t work as well as the industrial strength stuff. I’m guessing that a concentrated version of the 409 would have worked just as well as the Zep.

This weekend was our monthly build gathering, and the possibility of drinking heavily is very real. So no work on the diorama, as impaired building may negatively affect the progress. Being impaired however, is perfectly good for clipping and snapping a kit. Just goes to show how easy these damn things are; I can build it drunk off my ass. And it did take all day to get that done. I didn’t do much sanding as I just wanted to get the thing snapped for some pictures with the translucent white plastic. It feels very similar to some Wave FSS LED Mirage plastic kit; almost the same translucent white plastic. An in all honesty, I think this color looks pretty damn cool. But I gotta do a gold version. Maybe I’ll do one in this color in the future.

I returned to the diorama project today getting some more work on the base proper. I applied paper clay to the water area a few days prior, so now that it’s dry, I threw down some paint. A base coat of dark green out of a testors spray can from God know’s how long ago. Then sprayed two different dark blues to create some variance. The a clear gloss to seal in all the colors.

The water facing sides were weathered with some fades and dry brushing; then also clear glossed to seal in the paints. I’m getting real close to permanently attaching the two pieces of the base. Once I do, there’s no turning back, so I’m taking my time with that to make sure everything I need underground is done.

The silos/pipes/tanks were painted and graveled. The building was weathered during the live broadcast on Tuesday, but I finally got around to gluing down some gravel to the roof to finish that part.

The rest of the day was spent with washes and detail painting for the Zeeks. A clear flat was sprayed and with a quick battery test for the mono-eye lighting; a quick little photo shoot works as a nice stopping point for the weekend. This week will be busy but slow with the progress as everything slows completely down at this point in the project scheduling. The deadline looms; I think I have enough time; but this is not counting the possibility of seriously screwing something up. Something that I’ve already done by losing one of the backpack thrusters for the Zogok. It was painted and finished. Then vanished. So the remaining finished piece was silicone molded and a resin copy was made, painted, and mounted. You get upset when things go awry; and model building is just a test of that stupid patience and practice of being zen and keeping one’s head. Such setbacks really test that patience.