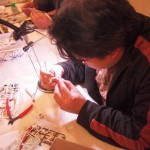 This past weekend was the first build gathering of the year, and it marks the 54th build gathering since we started. The gathering was the usual size with a few new members to the group. I was late in snapping pictures as there were also two good football games, well technically 1 good football game and the other was just a sad slaughtering of horses; and also a Lakers game that didn’t go well for the Lakers either.

In other news, we got Yuki an annual pass to Disneyland, so the past week has been spent sprinkled with little visits to the happiest place on earth.

At the start of the build gathering, Terry brought over one of his tables and I still have one of Dan’s tables from the last build gathering so we were able to change up the configuration in the front living room to accommodate 3 rows of tables. I started the gathering watching the 49ers-Saints game, for which Ed was hoping for a Saints win. The first quarter was good and a group of us just hung out in front of the tv until the game started to flat line a bit. At this time we headed over to the dinning room and started getting ready to build.

The game was all about forgotten; when the sudden inspiration to put the remaining unused table into play. We move the coffee table and set the table up in front of the tv. Perfect. 4 spots on the dinning room build table immediately opened up, Angel, Dave, Terry, and I set to build while watching the game – which started to get more interesting.

The build gathering continued. Hsiang Wei came and built for a couple of hours, which makes for two build gatherings in a row that he’s been to now. Maybe this return is permanent. Folks are working on various projects. The Broncos-Pats game starts and everyone is sent off for dinner. A group of us just picked up some KFC and ate watching the slaughter. Realizing that Jesus wasn’t going to help Tebow, we swapped out to the Lakers game. With 40+ points, Jesus wasn’t helping Kobe either. But still it was a good game to watch. Kinda strange to see the Clips so confident and cocky.

I ran around a little snapping pictures of the various projects in progress.

Yuki was in the kitchen making some turnip cakes as is what’s done around Chinese New Years. I was enlisted to help out here and there.

The dogs are passed out from running around but we’re still working away. A late start to a failed attempt at a drinking game using the final quarter of the Lakers’s game left us wanton for some excuses to drink. Angel and a few others have not seen Full Metal Jacket, so in goes that DVD, and we drink to the following:

Having felt it a bit early when the movie ended, we threw in Raiders of the Lost Ark and attempted to drink to that. We didn’t get a third into the movie before the last remaining players all agreed to give up and a few passed out with the movie still running. By this time, most folks have left and I spent some time cleaning up. It seemed like a low key build gathering, but we still had a decent group.

So we now have annual passes. Randomly, we can drop in and enjoy a few rides or just wander around leisurely. We hit up the last weekend of the holiday season for Disneyland and spent the daylight hours before heading out for our respective evening plans. Most of the time spent was walking around and enjoying the very nice and relatively warm winter day. We did a few rides, but only those with the shortest of wait times; it was still a relatively crowded day.

Yuki and I returned on Sunday to catch the last night for the park lit up for the holiday season. Spending a few hours, we ate diner and just enjoyed the evening for a few hours before heading home.