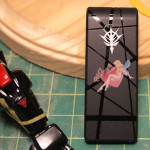 END_OF_DOCUMENT_TOKEN_TO_BE_REPLACED

The past few days I’ve been at home nursing a cold, so what better way to pass the time then cycles of painting and masking. Before my trip out to VA, Got the base coats of cobalt blue down, and over this I sprayed a clear flat. The flat coast is a test for masking, since the surface of the kit is now slightly rough and not ultra smooth as it would be with a glossy finish, the masking tape should be even less tacky, hence the chance for paint lifting is decreased. This update will mostly cover the work done over the past few days.

END_OF_DOCUMENT_TOKEN_TO_BE_REPLACED

A small little update before the weekend starts. The previous night, I masked the last two parts for Velvet and painted them. Also, last night, I sprayed a layer of black enamel over the entire base. The reasoning for that should become fairly clear in the picture below. Today after allowing the enamels to cure for a day, I snapped some pictures and took a video for this technique. Video and link to full tutorial explanation after the jump.

END_OF_DOCUMENT_TOKEN_TO_BE_REPLACED

This weekend was the August Model Build Gathering. We had a fairly small July gathering, so I wasn’t sure what to expect for this months. Folks trickled in, some of the new folks from last time came back, and one of the builders that came to the one of the earliest build gatherings made his triumphant return. I got a good amount of masking work for Velvet done, got utterly trashed, and played rock band. Damn good weekend.