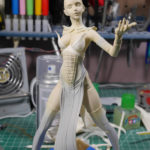 Towards the end of the Mercedes build, this kit arrived. The sculptor calls her 死神のデス代 or just “Death/God of Death”, I prefer the less final name of Grim Reaper. I picked her up off yahoo!japan auctions right after Winter Wonfest 2018. Unknown to me was that the sculptor: https://twitter.com/chilmirumirumi was already planning on releasing the kit to folks outside Japan through her webshop: http://artfiguegk.theshop.jp/. Yesterday there was a twitter update with two release times: March 17 @ 22:00 Japan time and March 18, 2018 @ 15:00 Japan Time. So for those interested in this kit, keep a watch on her webstore at these times to get it. Her kits sell out, and I don’t think she does multiple runs; so if you want it, get it now. Build her later if you want. I wanted to build her now, so I started a few weeks ago.

The nice thing about resin figure kits are the parts count. The down side to a low parts count is a decent amount of masking when getting around to the painting. The cleanup work is also a sizeable chunk of work. The first thing I usually do is pin together the major parts. The smaller bits are left off so I can get a general idea of what the kit looks like and what I need to do to approach the build. A visual really helps. Plus, pinning is one of the fun things about resin kits, you get a sneak peek into the end of the project.

Turnarounds done, the real work starts after the jump. END_OF_DOCUMENT_TOKEN_TO_BE_REPLACED 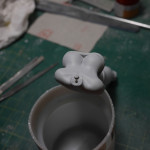 For any resin figure, after the fun pinning phase, the initial sanding phase, and the first primer; everything goes into a perpetual cycle to work the surface preparation. The first primer layer will reveal most if not all the mistakes in the surface. Pinholes are bubbles in the resin and when found, these are typically just the top of the bubble and just below the surface is the actual bubbles so just applying a filler over this pinhole will not resolve the issue. Rough sanding spots are hard to see in the bare resin and shows up clearly in the grey primer. Missed mold lines are also easily found after the surface has been primed. Here’s the half hour long video of this process. 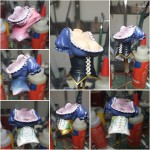 Work continued on Yukari with a sewing machine.

Returning shorly to the previous post, the leg parts were cut to remove the shoes as well as the upper thigh. Instead of painting on the leggings, I decided to sew some nylon mesh material together and effectively have real stockings on the kit. The mesh materials is measured against the painted legs and cut into strips. The mesh is then held together by some pins and sewn together using an elastic stitch. The excess material next to the open end of the stitch is cut away. This end of the stitch needs to be hidden, so the mesh tube is flipped inside out so the excess is on the inside. Once flipped, the mesh tube is slipped over the legs. Cutting away the upper thigh and the shoes makes it easier to put the stockings together, since the upper and lower areas do not need to be carefully cut and glued. Once the legging are in place, the shoes and upper thigh pieces are glued together and the lower torso and legs are done.

END_OF_DOCUMENT_TOKEN_TO_BE_REPLACED

Work continues for Cosette. The first layer of primer was sprayed after the initial sanding session and putty works. If I continue at this pace, I may actually be able to finish this kit by the time Pasadena Modelers Society ValleyCon rolls around next week. The priming session has showed some rough spots. I’m now on the fence about how to approach the hair. As the figure is supposed to be a little grimy and down trodden, I’m not sure if I should clean up the hair. The initial spraying of primer has shown a decent amount of rough spots on the hair. I may apply some small spots of putty and smooth out some of the rough spots, but it may take away from the gritty look of the figure. I’ll take another look and make a decision, but for now, I focused on areas that need to be fixed.