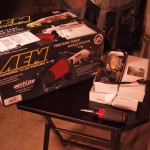 Okay, so they’re not overly difficult mods, but some basic mechanical skills are required. Earlier in the week, I ordered some HID kits for the low and high/day time running lights. The more expensive WRX models came with them standard. The HID kits are about $60 bucks for kit that includes 2 ballasts and 2 bulbs. Not a bad price. I also ordered a cold air intake that is stickered for legality under the California emissions. It’s the AEM kit. I saw it at the dealership’s parts department and they wanted 270 for it and would have given me a 10% discount, but after taxes, it would have just been about the same. So I did a little research online and found a place selling it for 230 with free shipping, they were in Cali, so I got to pay taxes, but they just happened to have a 10% off labor day sale, and after all was said and done, the thing cost 223 with tax. So that was ordered and it arrived today, the light arrived yesterday. Here’s a before and after shot of the engine compartment replacing the old air box with the cold air intake.

The AEM kit came in tonight, and since I was messing with the car, I took the opportunity to swap out the head lights as well as the daytime running lights (high beams). First up was the intake. The CAI was fairly simple to install. The most time was spent taking the old air box out. There was one bolt that is located in a pretty tight spot and slowly ratcheting the damn bolt off took forever. But taking my time and slowly adding more paint to my back as I bent over the car while working; everything came out with relative ease. I had swapped out the intake for my last tC. Hell, I still have the old air box for the tC sitting in my garage. Guess I can always donate that to my mechanic next time I swing by his place to check on Yuki’s civ.

The air box is out, damn the thing is fairly large. The filter itself is easily twice the size of the tC’s standard air box filter. The filter for the CAI is huge too, also probably double the size of the K&N intake I added for the tC 4.0. Here’s a shot of the thing before I assembled the whole CAI. Once installed in the car, it’ll be completely hidden. This is a much better improvement from my setup on the tC, where the shield was just there, the intake filter wasn’t isolated from the rest of the engine by anyone’s standards. This goes to the Subi’s design. Every now and then I would drop something, a screw or nut, and feeling around the front corners, I could feel some plugs that connected to nothing. Well, they’re for the foglights. Sometime in December, I may end up grabbing the foglight kit and just plugging it into the little bugger. That job looks to be a fairly easy addition as well. But back to the mods at hand.

The CAI is installed and completely hidden from view, The empty space that the large air box and plastic intake piece used to take up is now occupied by a nice red tube. I probably shaved a little bit of weight off the car too. Then again, the ballasts for the HID lights are not the lightest things in the world either, so I think it all just balanced out.

With the intake done, on to the lights. They were pretty simple to do. The little covers for the headlight assemblies have two cuts in them specifically for wires to run out. Again, this car was designed for HID lights. Not sure where the ballasts would have been placed in the higher models, but I guess I can always hit up the local dealership and take a look under the hood of the STI to see if I could spy the ballasts. Well the light replacement was very simple, and here are some pictures of the lights on. I turned on the high beams to test them out as well. Yeah, running 8000k, so it is a very slight ice blue tone to the colors. The same kit I used for the tC. It’s actually the same connector for the low beams as well, H11. So in hindsight, I could have pulled the ballasts and lights from the tC to use on Super Smurf; but why use old lights just to save $60 bucks? I could have also pulled the CAI off the tC and sold it off. Oh well, hindsight sucks ass all the damn time. Pretty ice blue lights!

Stuck the little AEM emissions sticker. The ballasts are placed in hopefully inconspicious spots that won’t pop off. I used the dual sided tape that came with the kit. The new thing with the kits are brackets to hold the ballasts, but I was too damn lazy to pull the bumper and what ever else I would need to get a good angle to install the brackets to the car’s frame. Hopefully the ballasts are fine, they never gave me a problem on the tC.

Ok, enough mods for now, I now need to save up for the foglight kits that I’ll probably install in a few months.