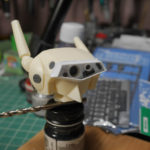 The group of us had a TGG Live broadcast two Saturday’s ago and I was in the midst of finishing the Death kit so I really didn’t have anything to work on, so I cracked open this little kit I picked up from Hong Kong the last time I went back. It is a recast of a set of SD kits from Metal Box. I had previously build the SD Officer’s pod so the break down of these kits are pretty nice. I also started on the SD Monster that is in partial paint stages. But interest on that beast waned so here we go with this. Instead of pins, I optioned magnets as the connection points for the joint/sockets for all the parts. Some quick clips of the flash, drill a hole here, add glue there, stick a magnet noting the correct polarity, and done. It’s standing fairly well on it’s own. Ok, maybe the skewer behind is giving some emotional support. But here’s the kit after the broadcast on Saturday.