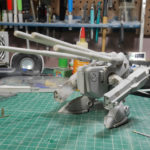 I picked up this kit on a trip to Hong Kong in 2011 from a shop that no longer exists. This was a recast from a series of SD Macross kits made by Metal Box as a limited run kit for Wonfes 2011 winter. The casting isn’t too bad. I did find a bubble here and there and there was a gap issue that I needed to fix. But overall, the kit is a pretty solid piece of resin. I had originally pinned this guy way back in 2011/2012 but had shelved it for various reasons. Then after my move in 2015, it kinda got lost in my stash of kits. After seeing all the cool SD kits at SCGMC, I feel the need to get one quickly done. A resin SD kit may actually be easier to build than a Bandai IP SD kit. I don’t have to deal with seams. Revisiting the kit, some of the pinning was rather poor. The thing is damn heavy, so I needed to repin using a much thicker brass rod. Here’s what the kit looked like a few nights ago.