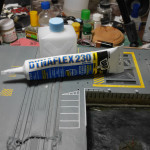 So this week started off fairly normal. The weekend’s progress was good and I started to focus on getting the base completed. The pylons and water facing areas were weathered with a sponge and Mr Surface 500 to give it some texture, then painted, then weathered. I then went and picked up some clear window sealant that dries clear, is watertight, and sand and paintable. The stuff works as an adhesive to mate the two halves of the base together. This is very important to be watertight so that when I start pouring the clear resin, it doesn’t start leaking and run all over the place. Lessons learned from the Z’Gok paper weight experiment. So hopefully I’m better prepared this time around. The sealant needs a few days to fully set up, but I only used a fairly thin bead of the stuff so it shouldn’t take that long. I’m hoping. The tube says 7-14 days. I really need to start pouring the resin soon, as that takes several days to fully cure. Time is running very short.

While the base is sitting pretty, I get back to the Zeonic frogs and apply a quick filter/wash to dirty them. I used model master enamel navy gloss gray, over thinned with tamiya enamel thinner. The tonight, I sprayed on a clear semi-gloss to finish everything off and set it ready for the base.

Earlier in the week, I was picked up a battery box for the base at the local electronics shop. Battery longevity was on my mind; because a single 9V square cell just does not have the capacity for long hours running the LEDs. But a battery box that lines up 6 AA cells does; so off I went to get a box. While wandering the evil store; I glazed over at the site of Arduino products. Namely some starter kits. I’ve seen some folks online do some pretty cool things with a microcontroller and their gunpla. The east coast modeler Squee (Chris R) has done some damn cool things with micro controllers. So I grabbed the bluetooth starter set and started learning the ins and outs. There’s a little bit of programming, but so far it’s pretty basic and my programming skills are VERY rusty; but the damn things are pretty fun, and seriously powerful.

So I get home, and the board’s been drying for a day. I flip the sucker over and start drilling pilot holes. And end up cutting out a chunk of the board just above the wiring. Why? So I can stick my chubby sausage fingered hands into the area to rip out the already redone wiring scheme…

And here’s a video of progression from this point on and the results: