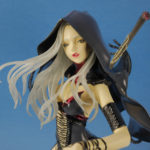 And she’s done. Took a little while longer than I had planned. I thought I had her finished before SCGMC, but the glue didn’t set correctly, and if you were at SCGMC 2018 and looked closely enough, her head was sitting incorrectly and looked a bit off. After the show, I drilled out the dried glue and tried another session with CA glue that failed. I mixed up a small amount of resin and just carefully applied some to the drilled out area as well as to the neck joint and placed her on to the main body. 15 minutes later after the resin fully cured, her head was solidly attached and correctly attached to the body. This will be a difficult kit to travel with since most of it is glued together. But it was a fun build, even though I took a 7 month long break after getting through 87% of all the work to finish it.