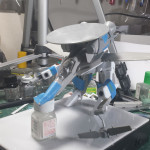 After a quick calculation, from the date of this posting, the last time progress on this kit was made was 2776 days ago, which translates to 7 years, 7 months, and 7 days. That said, the last time I left off, the kit was partially glued, some putty work, and lots of sticky tack and blue painters tape holding the sucker up as my usual “test” fit style of building. 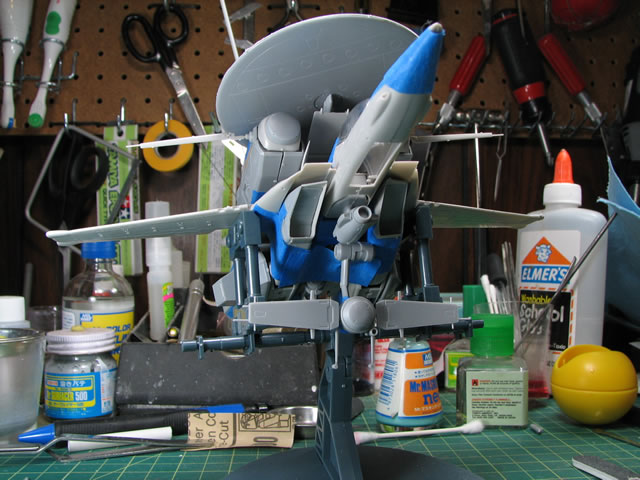 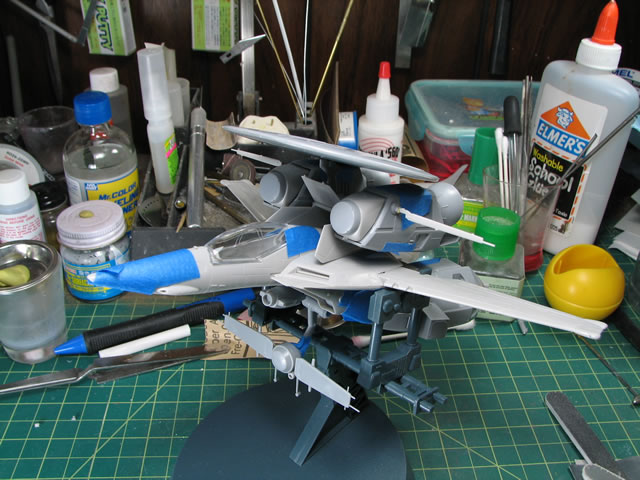 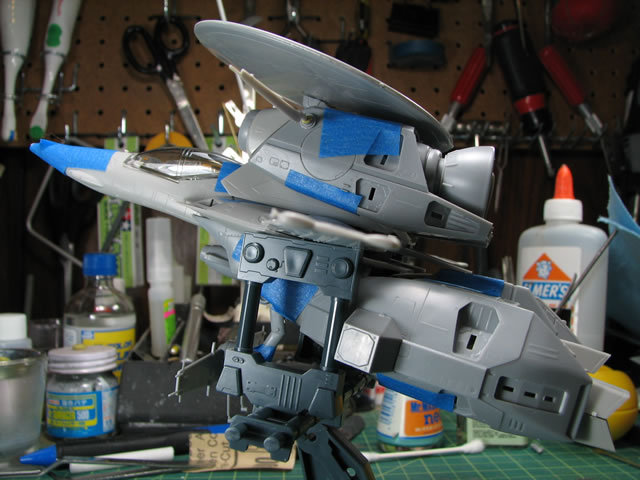 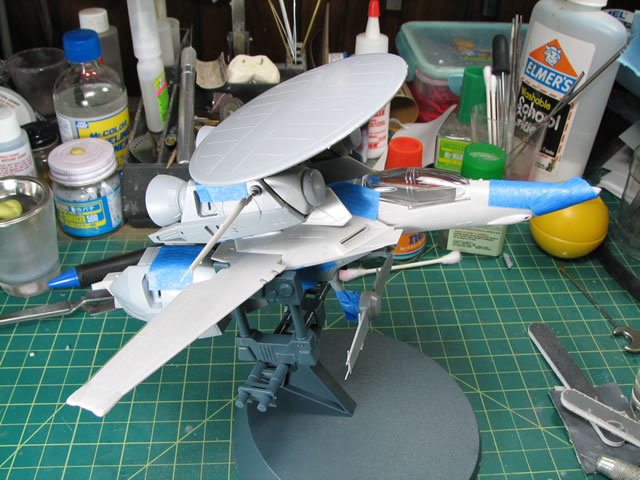 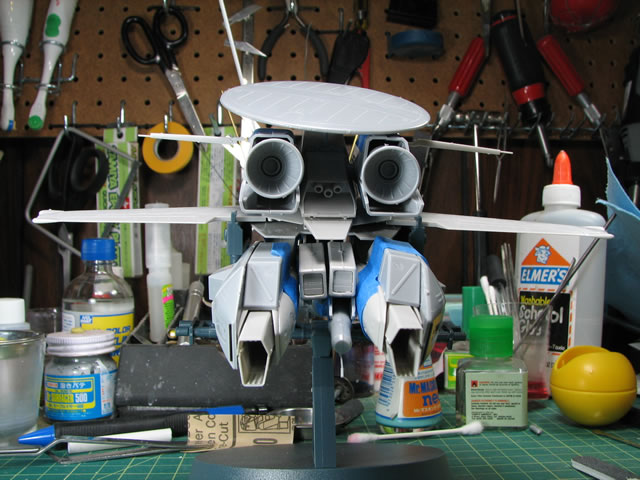 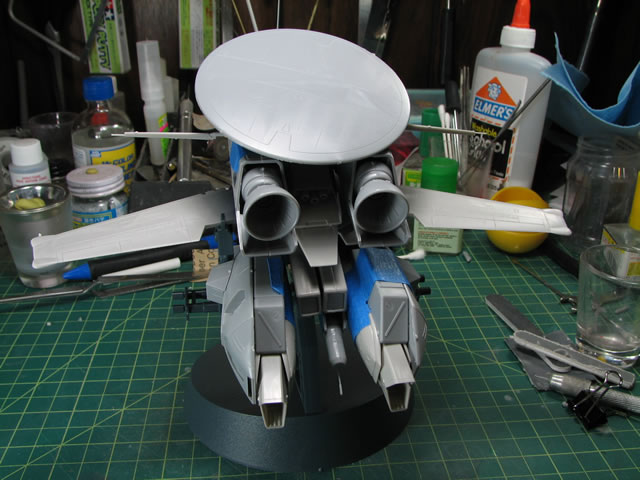 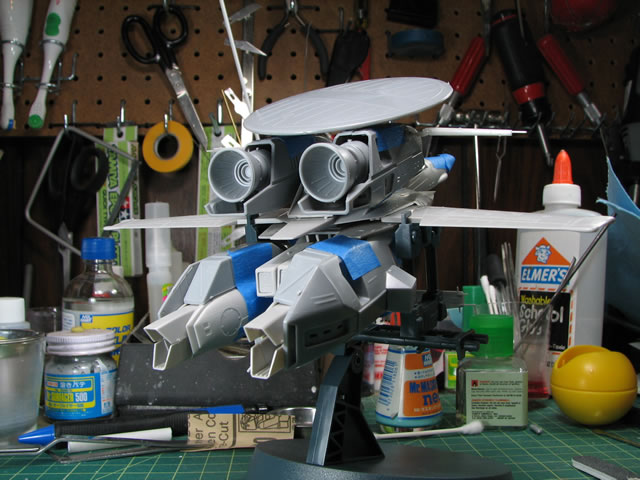 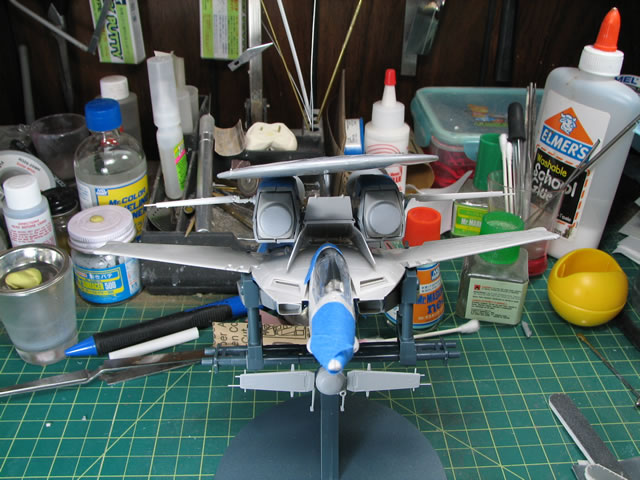 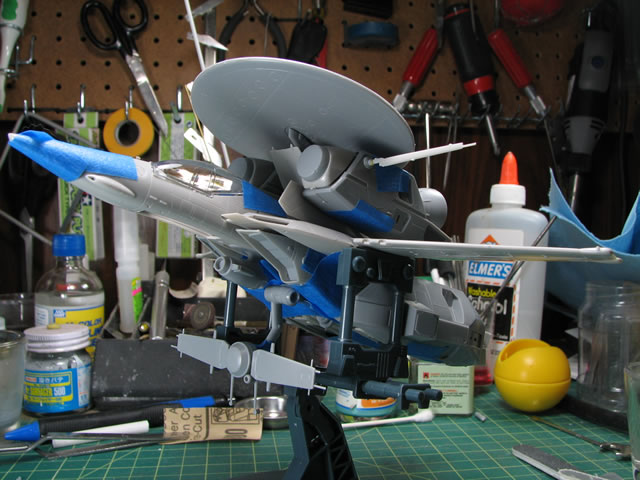 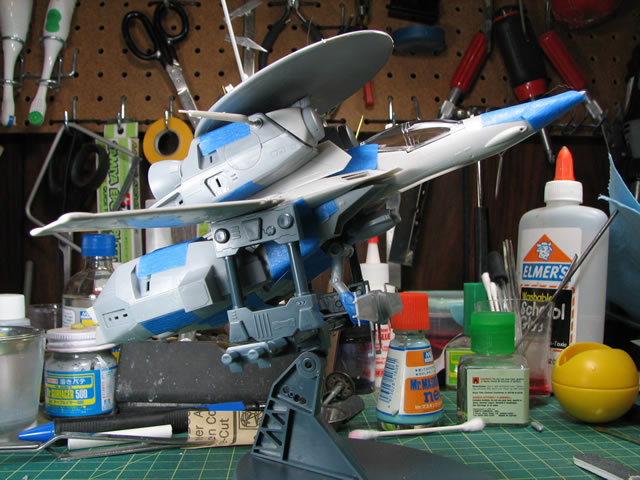 This is a Hasegawa kit, and should be build like a Hasegawa aircraft. Building one of these kits is a quick reminder that I’m horribly spoiled by the ease in which Bandai gunpla kits comes together. I could throw a hobby knife, bottles of paint, and the airbrush into your standard MG/HGUC kit, shake the box a little, and the kit would be completed.

Again, it’s been 7 and a half years since I last touched this kit. I’m also discovering that I’m missing parts; as quite a bit happens in a span of 7 years. Recently, I was reminded that Hasegawa finally came out with a Gerwalk for the VF-1 last December. From some reviews of the kit, I learned that a great deal of the original VF-1 aircraft kit is reused. So a stupid idea popped into my head – time to bash the new Gerwalk with the VE-1 kit.

It’s hard to break away from my usual style of building; so more putty and more painters tape, and I transform the distinctness of the two kits into something, somewhere in the middle.

And while there are quite a few similarities with the kits, there are also some pretty big differences. I’m discovering that the leg and arm parts are most likely from the Hasegawa Battroid kits, while most of the aircraft areas are the same mold. Cosmetically, it has to be the Elintseeker. So from the above pictures, the white areas are from the new kit. There are design changes in certain areas that mate up quite well. And then there are others that do not. Mods to the original VE-1 parts were necessary to frankenstein this beast together.

The intake piece was cut apart and glued to the VF-1’s intake piece. I had also picked up the PE set for the VF-1, and those PE parts only work on the VF-1 aircraft, not the Battroid/Gerwalk composite pieces. Hence the surgery.

Then the legs needed some work to add polycaps so it can connect to the new VF-1 upper leg and foot/thruster parts. I used styrene tubes to hold the polycap and glued them in place using some dissolved ABS. I may still need to move things around for the best look, and possibly need to cut apart the foot thrusters to shrink them a little for a better looking fit.

This is a relatively short post. I’ll hope to be focused on this kit to completion. It should be the main project I have on our schedule Those Gundam Guys Live Broadcast scheduled for tonight (April 22, 2015) @7:30PM Pacific Standard Time. So if you’re read this, watch the broadcast and if you have questions, post up in the comments.